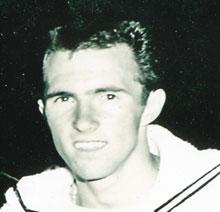 This 1959 Antioch High graduate is still in the black and gold record books – his mark for the 220-yard (now 200-meter) dash has not been topped in five decades. Several other individual performances in the 220-yard event qualified him as the Contra Costa Athletic League champion; he won the North Coast Section Meet of Champions with a blisteringly fast 21.5 seconds. It was Mack’s 1959 performance of 21.1 seconds in the straight-away 220-yard race that resulted in first place at the California Aggie Invitational and a ranking of eighth best prep time in the United States that season, as determined by Track and Field News in 1959. That same race has been converted electronically to now include a single turn and is measured as a 200-meter event. Mack was deservedly named to First Team All-League that season. His speedy times earned a berth as only the second Antioch athlete to qualify for the California Interscholastic Federation Track and Field Meet of Champions, following Curtis Casey in 1949. Mack still ranks as the fifth fastest all-time 400-meter racer in Antioch High history. Prior to the senior season’s national recognition, Mack’s accomplishments as a junior and sophomore were also note worthy. As a 10th grader, he set his first AHS record in the 220-yard dash in a time of 22.5. His performance in the 330-yard distance set AHS, Contra Costa County and North Coast Section meet records. His career best performance in that event was 36.1 seconds. Mack set a mark of 10.3 seconds for the 100-yard dash and 22.3 in the 220-yard dash prior to being sidelined by injury at the end of his junior season. As a lightening-fast runner, Mack was ideal as a left half back on offense and defense for the Panther football team, for which he earned two varsity letters. Following AHS, Mack joined the U.S. Army and was stationed in Germany, where he competed on the Army Track and Field Team in 1960. His team won the 7th Army, 3rd Armored Division Championship. Mack won first place in four races; the 100 yard dash in a time of 9.9 seconds, (accomplishing the rare feat of cracking the 10-second barrier), the 100 meters in 11.1 seconds, 200 meters in 21.3 seconds and was a leg of the four-man, 400-meter relay team which ran 40.1 seconds.