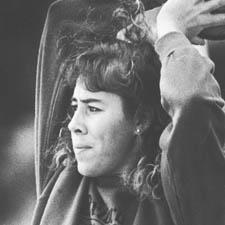 “March 31, 1983.” Proud mom Ruth Georgen glued a neatly typed caption under the picture of a grinning 14-year old wearing a blue and gold uniform for the first time: “Margaret, today you ran your first track meet… you had a wonderful time. Antioch won the meet overall and we’re very proud of our “Speedy Goose.” Three months later, Antioch Junior High School Principal Brooks Golden would award Margaret Georgen a certificate as Best All-Around Athlete. The late Mrs. Georgen – a long-time Antioch schools employee and namesake of the Ruth Georgen Memorial Student Service Award at AHS – was able to witness her daughter eventually becoming the Antioch High School discus record-holder, a mark that still stands after 27 years. By the time she was a senior in 1986, Margaret reached the pinnacle for an Antioch prep athlete – “Female Athlete of the Year.” During her freshman and sophomore years, she played volleyball and was a sprinter in the 100, 220 and 440-yard relay. Margaret was MVP and team captain in volleyball and “Athlete of the Year” at AJHS. By the time she was a junior, Margaret took up a sport that she had never tried before –heaving a 1-kilo (2.2-pound) disc as far as it would go. In her junior year, Margaret won first place in discus in the Diablo Valley Athletic League, first in the North Coast Division 3-A Championship and third place in the NCS Meet of Champions, qualifying her to participate in the California State CIF Track and Field Championships, earning a “Most Improved” award in track and field. By the next year she was named MVP. As a senior, Margaret again played volleyball – and was so talented she was named Antioch High School’s Most Valuable Player and made First Team All-DVAL – the only player in East Contra Costa County to do so in 1985-86 as an outside hitter. She was also Big “C” Athletic Club Athlete of the Week for volleyball and made the All-Tournament Team from the Antioch Panther Classic Volleyball Tournament in 1985. At the prestigious Arcadia Invitational track meet, she set a new AHS record in the discus of 138-8. The record lasted exactly four days. In a league meet against Mt. Diablo High School on April 16, 1986, Margaret had the best throw of her career: 141-8, smashing her own Antioch High record, which was already twenty feet beyond what her nearest competitor had done that season. The throw put her in the all-time Top Ten for women in the East Bay. As of 2013, her record still stands at Antioch High. When notified earlier this year that she was still #1 in the AHS record books, she said jokingly “someone needs to break this record.” She ended her prep sports career with a year of firsts – First Team All-DVAL in volleyball, first place in the DVAL, North Coast 3-A regional and at North Coast Section Meet of Champions for her discus throws. She again qualified for the CIF meet. Margaret attended California State University, Northridge briefly, but returned to East County, completing school at Los Medanos College, and had a successful 20-year career with Pacific Bell.