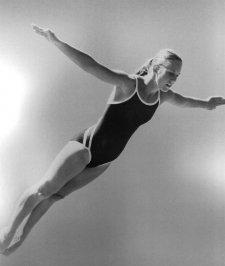 The honor of being an All-American is reserved for only a select few who have distinguished themselves as the best athletes in their sport in the United States. Marion Gelhaus earned this accolade three times, becoming the only known Antioch athlete, male or female, to be an All-American in high school, community college and at a four year university. As the Antioch High School swimming and diving team’s MVP, and a three-year diving-only MVP, she dominated her sport at the school and North Coast Section, winning the NCS crown as a sophomore, junior and senior, the first person to be the NCS diving champion for three consecutive years in 1980-1982. During her final North Coast appearance against 77 competitors, Marion set an NCS scoring record of 467.00, beating the second place finisher by 83 points and breaking the record she set as a junior of 434.15. The NCS performance earned Marion a position in 1982 on the girls’ high school All-America diving squad, the only Northern California diver to be named to the 30-person group, representing the best high school divers in the nation. As the daughter of Clark and Ingrid Gelhaus, owners and operators of Antioch’s Solar Swim and Gym, she was introduced to a pool at three weeks old. She could swim the length of her parent’s 75-foot gym pool by age three and by age four was on the Delta Skimmers recreational swim team. Marion was performing synchronized swimming routines by age seven and dedicated herself to diving by the time she was nine. By 1977, she was diving at the AAU Junior Olympics, qualifying for her age group at the national level every year until 1983. Long-time AHS Head Swimming and Diving Coach Greg DeChristofaro coached the teen diving prodigy exclusively for her freshman year. Marion worked continuously to hone her techniques with Coach DeChristofaro and with the additional help of her mom, Ingrid, who was an assistant AHS coach. Marion’s twice daily practices were under the watchful eye of Ingrid, who mentored Marion through the hundreds of hours on the diving board required to achieve the precise form required of a champion. Even with hours of practice each day, Marion maintained a GPA between 3.5-3.8 for her high school career. At Diablo Valley College, the veteran diver qualified for the California Community College State Diving Championships in 1983. She placed first in both the one-meter and three-meter springboard, earning her second All-American honor. Marion turned down a full-ride scholarship to the University of New Mexico and was recruited by Arizona State University, before choosing California State University, Northridge, which gave her a scholarship in diving. While at CSUN, she qualified for three consecutive years to compete at the National Collegiate Athletic Association level. In 1984, Marion earned a bronze medal in the 3-meter springboard. She won two more bronze medals in ’85 and ’86 for the 1-meter springboard and a silver medal on 3-meter springboard at the NCAA National Swimming and Diving Championships. She led the Matadors to second place finishes in ’84 and ’85. Marion was named Most Valuable Diver for CSUN in 1986 and was named an All-American for the third time. Marion graduated with a degree in exercise physiology in 1986 and completed an advanced degree in physical therapy in 1992, the field in which she currently works. Following college, Marion coached the Occidental College diving team for two years, and serves as an assistant diving coach for the Channel Coast Divers in Ventura, Calif., an AAU-registered club team she helped found in 2008.