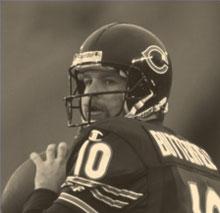 This Antioch High grad’s football career stretched from Stanford to Scotland and back to Antioch. Born in 1973, Mark learned his skills early as a player in Antioch Youth Football and later played football, basketball and baseball at Antioch High. The 6’4”, 215-lb. phenomenon was named an All-America pick after being ranked 7th best high school quarterback in the nation, grabbing the attention – and a scholarship – from prestigious Stanford University. As part of the Cardinal, Mark connected on 194 of his college career 333 passes. As a college senior, he passed for 2,533 yards, throwing 19 touchdowns – four of which were in one game against UCLA – and had only nine interceptions. He was named to the All-Pac 10’s second team his senior year and was the MVP of the Stanford team. In 1996, Mark signed with the Chicago Bears. Prior to Chicago, he was a member of the Arizona Cardinals practice squad as an undrafted free agent. Following his National Football League career, Mark traveled to Scotland. He played in the World Football League for the Scottish Claymores and also for the Frankfurt Galaxy where he played in the 1998 World Bowl VI against the Rhein Fire. Following his professional football career, Mark came back to his hometown and coached in the Antioch Schools.