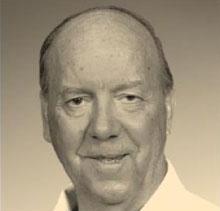 An astonishing Earned Run Average of less than one run per game in 1954 and 1955 put Max in the record books as a top pitcher, one of six selected in 2000 to the DVC All Half-Century Baseball Team. In 1950, the three-sport athlete entered AHS as a sophomore. The native Arkansan’s 6’1” slim build earned the nickname “Slatts.” For the next three years under Coach “Babe” Atkinson, Max evolved into a phenomenal baseball pitcher – leading the Panthers to league championships in both 1952 and 1953. His three-year record was 21 wins, 7 losses. When not pitching, Max played first base and led the team in hitting with a .400 average, making All-Contra Costa County. Following high school, Max went to East Contra Costa Junior College (later renamed Diablo Valley College). Under Coach Hugh Boschetti, Max won five games, including a 3-1 league record with a .89 ERA as a freshman in 1954. His sophomore year, the “curve-balling control artist” had nine victories, including a 5-0 league record, and allowed only five league earned runs for the year with a documented .92 ERA which still stands today. This cemented his name in the DVC record books as being one of the top pitchers in Viking history. That 8-l-l season in 1955 earned a league championship for his team and led to his selection as a pitcher for the All-Coast Conference team. His two-year Viking total of 14 victories includes eight league wins. Following junior college, Max played semi-pro baseball in Pittsburg as pitcher for two years and one year in 1957 for Healdsburg. Max shared his baseball knowledge with a new generation of players when he coached both Little League and Babe Ruth teams in Antioch in the 1960s and ‘70s.