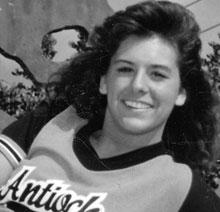 A child’s tiny, shamrock-green windbreaker, emblazoned with “Rockets” across the back could have belonged to any Little Leaguer. The well-worn jacket was stuffed in the bottom of a cardboard box of childhood mementos loaned to the Antioch Sports Legends hall. What makes this jacket so special in Antioch sports history was that it was worn by Mia Rexroth. She was only the second female to break the gender barrier in boys’ Little League baseball in the 1970s, and continued on to become the powerhouse softball pitcher who led Antioch High to a North Coast Section victory and her college team to a national championship. Antioch High’s 1988 Female Athlete of the Year was an athletic dynamo; varsity softball MVP (and All-DVAL First Team), varsity soccer MVP and a varsity basketball player. As a junior, Mia also made First Team All-League and was Co-MVP at Antioch High, as well as All-East Bay, Oakland Tribune Athlete of the Year in Softball and was awarded Concord’s Big C Athletic Club’s certificate for Outstanding Accomplishments in Softball in 1987. In addition to these, she received a “Certificate of Champions’ from Big League Softball, a division of the Little League Baseball organization in Pennsylvania in 1987. The City of Antioch presented her with a Distinguished Service Award as Outstanding Player of the Contra Costa All-Stars Big League Softball World Series Team in 1986. The three-year softball starter played on the DVAL Championship team in 1986 that defeated Pittsburg 2-1 for the league title in a close game in which she drove in both runs and threw out the tying run at home plate. That same team went on to become North Coast Section Champions of the California Interscholastic Federation in 1986 with the sophomore’s solo home run in the 9th inning of the final game. She was named to the All-CIF Team in 1986 and 1987. Following high school, Mia played for softball powerhouse California State University, Fresno, and as a freshman played on a USA softball team that traveled to China, Japan and Hong Kong. She played outfield three years for the Bulldogs, the 1989 and 1990 National Collegiate Women’s Softball Division 1 second place team, and appeared in the NCAA Women’s College World Series in 1989 and 1990. She earned recognition in 1991 from the NCAA Big West Conference as a Scholar-Athlete. Mia then transferred for her senior year to University of California, Davis, where she played shortstop for one season, earning MVP honors in 1992. Following graduation, Mia coached for four years at Davis High School, earning Coach of the Year recognition twice and tried out for the U.S. Olympic softball team in 1996. Mia didn’t really realize how much of a barrier breaker she was for women in sports. When playing in the all-male Little League as a little girl, “I didn’t really realize there was a difference,” between herself and her teammates, “until I played Babe Ruth when I was 13. I pitched and struck out one of my friends and made him cry. I also made the All-Stars and they said I couldn’t play unless I wore a ‘cup.’ That was when I started playing softball instead,” Mia recalls. Baseball’s loss was softball’s gain. She credits her Rockets coach for allowing her to break the gender barrier. “I was very fortunate that Kelly Martin was able to see me as an athlete and not just a girl.”