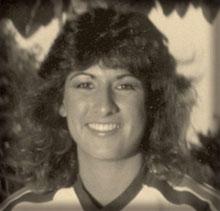 Michelle Gromacki’s face may have been hidden behind a catcher’s mask during her playing career, but she continues to make herself known in the world of softball. Michelle was chosen All East Bay First Team catcher and was Antioch High School team MVP in 1982. On April 27, 2007, Michelle’s OO jersey was officially retired from the AHS lineup. She began her post-prep career at Butte Junior College and then spent three years at Cal State Fullerton playing on its national championship team. She led the Titans to a 170-19-1 record string of victories between 1985-1987, including the NCAA 1986 national championship. Michelle’s softball career didn’t end with college. She continued on, playing in the softball World Cup in Japan in 1989, Softball World Championship in 1994 and played five times in the Olympic Festival. Michelle qualified for the Pam Am games and was a finalist for a berth on the 1996 Olympic squad. She’s a gold medalist for several USA Softball teams and played professional softball. She spent 12 years behind home plate for the American Softball Association’s Redding Rebels, which earned a national championship three times between 1993-1995. Her stint with the Rebels resulted in being named a nine-time American Softball Association All-American. Michelle moved off the diamond and into the dugout at the end of the 1990s, becoming head coach of the 2001 USA Softball National Red Team. She was assistant coach of the National Elite Team between 2002-2004, all the while maintaining her duties as head coach at Cal State Fullerton, where she currently coaches. Michelle’s Fullerton teams were Big West Champions for five out of the seven years she was head coach and Michelle earned Coach of the Year honors in the Big West Conference in 2000 and 2006. She was also Regional Coach of the Year four times: 2000, 2002, 2003 and 2006.