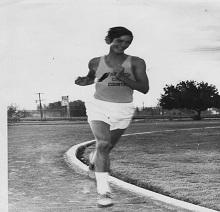 The early 1970s produced some of the best distance runners to ever graduate from Antioch. Among the best of the best is Mike Kelly, whose cross-country 3-mile time of 14:46, remains the fastest ever run at a North Coast Section meet by any Antioch High junior. His 14:34 performance for a three-mile cross-country course is the third fastest time ever achieved in Panther history as of 2010. The First Team All-Diablo Valley Athletic League track star had career performances of 4:19.74 in the 1600 meters and 9:34.84 in the 3200 meters, as well as being the league two-mile champion running a 9.39 during 1972-73. The AHS Track and Field MVP also earned the Outstanding Student Athlete Chuck Stapleton Scholarship. In cross-country, Mike was also First Team All-DVAL and AHS MVP as a junior and Second Team All-East Bay as a senior during his high school career between 1970-1973, as well as “Sportsman of the Week” as selected by East Bay Prep Writers Association. In 1970-71, he was ranked as the fastest sophomore cross-country runner in Northern California. Mike earned six varsity letters in track and cross-country, and a seventh for wrestling for the Panthers. The speedy athlete was offered running scholarships from four colleges and accepted a full-ride to run for Utah State University, which he attended between 1977-1980, after serving in the Marine Corps. While in the service, Mike ran for the All-Marine Corps Cross-Country and Track team and competed in the Amateur Athletic Union National Cross-Country Championships. The military veteran successfully transitioned into a student athlete, where he was the Aggie cross-country team’s Outstanding Freshman in 1977 and was MVP in 1978. His top college honors include being a qualifier in the NCAA Division I track championships and being the 3000-meter steeplechase champion of the Pacific Coast Athletic Association Conference. Mike’s time of 8:50.2 in the 3000-meter steeplechase, set in 1979, stood for 30 years until 2009 as the record at Utah State. By 1980, Mike had run the team-best times in both the 5000-meter (15:38.09) and Steeplechase (9:19.31).