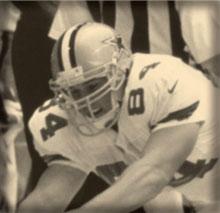 Mike Lucky’s performance as a high school senior in 1993 was so spectacular that he was recruited by every college in the Pac 10, but picked the league champions – the University of Arizona. While at Antioch High, Mike’s varsity career included 53 catches for 1,000 yards and 16 touchdowns. As a senior, the tight end was named First Team All-State and earned a spot on the All-America team, the 18th best prospect in California prep sports. Mike made his mark with the Arizona Wildcats, finishing his college career with 46 receptions for over 500 yards and four touchdowns. He was a key member of the 1998 Wildcat team, ranked fourth in the nation at 12-1. He played in the Hula Bowl and Florida Gridiron Classic. The Dallas Cowboys drafted the 6’6”, 280-lb. college senior in the seventh round in 1999. He played four years in Dallas, starting 18 games and finishing his pro career with 19 receptions and a touchdown. Mike served as a blocking tight end and was part of the historic game when Emmitt Smith broke the all-time rushing record. The Ed Block Courage Award was given to Mike for overcoming a devastating knee injury prior to his second season. Knee injuries ended his pro career in 2002.