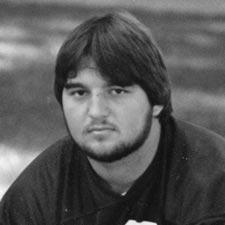 In 1978, Antioch Panther Mike Shaw capped his prep career with one of the nation’s highest honors for athletically and academically gifted students, the Thom McAn Award. A massive silver cup loaned to the Antioch Sports Legends Hall is a memento of being chosen the winner from among 70 nominees nationwide. Mike, the son of 2007 Sports Legends inductee Worth Shaw and active Sports Legends volunteer Bertha Shaw, was also the recipient of the Scholar-Athlete Award from the Northern California Chapter of the National Football Foundation for his perfect 4.0 GPA and performance as one of the best football players in Contra Costa County in 1978. Antioch High School’s football team captain was MVP of the 1978 season, a First Team All-Diablo Valley Athletic League selection on offense and played in the Contra Costa-Alameda All-Star Classic. Mike was also named Second Team All-East Bay as a running back and received Antioch High’s prestigious Ron Pritchard Award for Outstanding Back for the Panthers in his senior year, scoring eight touchdowns and rushing for 609 yards on 100 carries despite missing two games due to an injury. In a non-league game against Sacramento’s Luther Burbank High, he scored a 50-yard touchdown while rushing for 160 yards. Mike played varsity football all three years at Antioch, earning Second Team All-DVAL (Offense) as a junior in 1977, the year in which he rushed for 287 yards on 58 carries, scoring four touchdowns. Mike’s 13 touchdowns and eight extra points placed him as #10 on the AHS all-time career scoring list at the time, with 86 total points. As a freshman at the University of California, Davis, Mike won the award for Outstanding Freshman (Offense) in 1979. Few players can say they were part of a championship team, but Mike played for five consecutive league winners: as a Panther, in 1977 and 1978, and for three years as an Aggie. Davis was the Far West Conference Champion three times between 1979-1981. After graduation from college in 1983 with a degree in physics, Mike began his career as a scientist, working for Lawrence Livermore National Lab. He completed a doctorate degree from UC Davis in 1991 and continues to work at LLNL where he develops computer codes for lasers. Dr. Shaw spent several years involved in sports as a Little League coach and umpire, having worked behind home plate at the Western Regional Senior Little League tournament in Oregon in 2009.