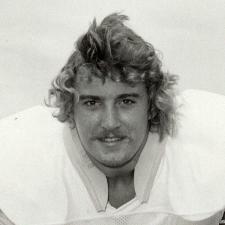 Described by Coach Marv Comstock as “one of the finest linemen in the history of Antioch,” Norm Bittner became an accomplished tackler representing the black and gold of Antioch High. The 1976 football team defensive captain was Antioch High School’s MVP. Norm’s power and tremendous speed – running a 40-yard dash in 4.9 seconds – earned Antioch High School’s coveted Gino Marchetti Award. His 116 tackles (averaging 11.6 per game) and seven sacks during the season led to a string of recognitions; First Team All-Diablo Valley Athletic League on both offense and defense, First Team All-East Bay guard and Second Team All-East Bay as a defensive lineman, as well as selection to the All-Northern California squad, named by the Citizens Savings Athletic Foundation, making him one of the top 64 Nor Cal prep players. As a junior, Norm was chosen Second Team All-DVAL as a defensive lineman and was “absolutely frightening in the middle. He covered everything from tackle to tackle,” according to Coach Comstock. Norm was a Fitzpatrick Chevrolet “SuperSport of the Week,” joining 99 other prep stars from throughout Contra Costa as one of the top 100 athletes of 1977. The 1977 Antioch High grad was selected for the Contra Costa-Alameda All-Star game played that year at Eells Field. Norm helped the Contra Costa team to a 28-14 win over Alameda. The 6-foot-1, 210-pound lineman received several college offers, but accepted a full-ride scholarship to play football for the University of Nevada, Las Vegas where he lettered for three seasons; 1977-1979. Following college, Norm came back home to Antioch, where he played for the semi-pro Antioch Hornets team, which was resurrected in the early 1980s, and launched his career in law enforcement, serving in the Pittsburg, Antioch and Piedmont Police Departments.