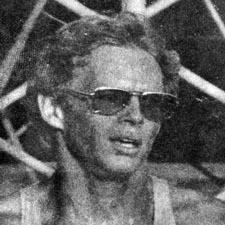 In the era before Nike and waffle soles revolutionized running, ing, Perry Anderson’s fleet feet set a record in the 1600 meters (formerly the one-mile) distance that continues to stand as the best performance in the history of Antioch High School. Perry’s time of 4:19.44, achieved during his junior year, cemented his position as one of the Panthers’ top runners of all time. The 1973 AHS graduate ran on the varsity team for three years, but began racking up running records as a 9th grader at what was then Park Junior High. He ran a 4:48 mile at the Modesto Relays in 1970. As a junior cross-country runner, Perry ran the second fastest time ever recorded at a North Coast section meet for an AHS competitor at 14:51 in the 3-mile distance. He bettered that time as a senior with a 14:49 clocking in the event, which earned First Team All-Diablo Athletic League recognition, as well as being named All-East Bay Second Team. Perry excelled in both track and cross-country as a junior. In addition to the all-time record in the 1600-meter set in 1972, Perry recorded the second best overall Antioch High times in two other track events; the 800-meter (1:56.14) and the 3200-meter (9:27.64). Perry’s races were run using yards, and his times have since been converted to metric distances following the 1980 transition. As a senior, Perry ran the second fastest 3-mile cross-country time (14:32) ever recorded by an AHS athlete. He was named to both the First Team All-DVAL and First Team All-East Bay for cross-country running and was recipient of the Panthers’ MVP for cross-country. The end of his prep career was capped the following track season by being named First Team All-DVAL and being crowned the DVAL mile champion.