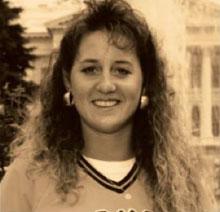 Rachelle emerged as perhaps the premier scholar-athlete of the 1980s at Antioch High: academics and class president duties shared equal time with softball, but the 1989 Contra Costa Times Player of the Year managed to squeeze in some amazing athletic accomplishments. Her prep softball career began as a Park Junior High 9th grader: She was Student Body President and was named Athlete of the Year. At AHS, Rachelle batted .423 as a sophomore and was All-League at second base as a junior (stealing 22 bases) – both years while service as class president. She was All-League pitcher and as a senior, she was MVP in two sports; volleyball and softball, where softball, where she had a 13-1 pitching record in her 1989 senior year, as well as Tribune Player of the Year in softball, with a 13-1 pitching record. Rachelle continued in softball at Sacramento State University as a four-year starter, attending on a full scholarship. Years of student leadership experience made her an obvious candidate for team captain – as a freshman. By her junior year as a Hornet, Rachelle had a 4.0 GPA and had started in every game. She captained her team to a ranking of 16th nationwide in the NCAA Division 1 softball poll, and made the NCAA regionals; in four years, Rachelle never missed a game – 215 in all, starting in 203 contests. Her softball eligibility ended in 1994. But Rachelle shifted to basketball, where she played point guard while finishing her degree in sports marketing and business. The scholar-athlete continued to prove herself as a graduate student, achieving a perfect 4.0 at the University of Tennessee where she earned a master’s degree in sports management in 1995. Rachelle’s academic and athletic expertise is put to good use at Wilson Sporting Goods, where Rachelle currently works as national accounts manager.