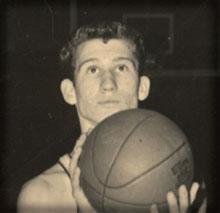 One sport was not enough for Rally – he did three. It’s been exactly a half-century since he wore black and gold, but many remember his dazzling skills on the diamond, the court and the track. Rally was a four-year starter in baseball and named all-league twice. He was all-league again in basketball and scored an astounding 223 points in his senior year – averaging 18.5 points per game – setting a Diablo Valley Athletic League record. That was not his only record – he long-jumped 20 feet, 9 inches, setting an AHS mark that stood for many years. He continued in both basketball and baseball at Diablo Valley College, setting the bar high by being named All-Conference in both sports. He was also named to the All Nor Cal team in basketball. He scored 952 career points and averaged 20.3 points per game in his college sophomore season. Rally’s ball-handling skills took center court, as he accepted a basketball scholarship to California Polytechnic State University, San Luis Obispo. The Mustangs made a great investment, as Rally led the conference in scoring in his senior year and was all-conference first team. He went on to set four Cal Poly all-time school records; most points scored in one season (478), most points in career (1,034), highest points per game season average (21.7) and most field goals in one season (175). While at Cal Poly, Rally was selected as an honorable mention to the UPI All Far-West and All-Coast teams and was one of only three Californians chosen as honorable mention for the Small College All America team. Los Angeles came calling after college, drafting him into its American Basketball League franchise. He won a release to play near his hometown with the Oakland Oaks, appearing in pre-season exhibition games. After his basketball career was behind him, Rally took up fast-pitch softball, and played for Napa, one of the eight U.S. teams in The AAA 1975 World Series. Rally was also named in 1988 by the Contra Costa Times as one of the best prep basketball players in the history of the Diablo Valley Athletic League.