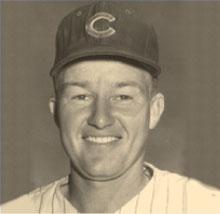 Ralph’s outstanding Panther career included being on the All-League backetball and baseball teams in 1954. As a freshman, Ralph played varsity basketball and in baseball, he batted .318, leading his team to a league championship. By the time he was a junior, Ralph was batting .400 and earned All-League catcher honors, capping the year by playing summer ball with the Yountville Merchants. The Panthers won the league baseball the S.F. Examiner All-Star squad and All-League honors. The two-sport star continued his achievements at East Contra Costa Junior College (now Diablo Valley College) in 1954-1955, batting .358 before transferring to Stanford University. At Stanford, Ralph was named All-League catcher in the California Inter-scholastic Baseball Association and ended with a .400 average in league play – hitting .358 for the season – and chosen for the national All-America team. The Chicago Cubs came calling in 1958, drafting Ralph to its Class “B” Burlington, Iowa squad. Between 1959-1963 he played with several farm teams. In 1974 Stanford awarded him with an entry into its Baseball Hall of Fame and a plaque for his contributions to Stanford athletics. Ralph became a much-honored prep baseball coach at Kennedy High in Fremont where he retired after a 30-year coaching career. In 1999 he was named North Coast Section Coach of the Year. He coached several league winners, four future professional players and has a field at Kennedy High named in his honor.