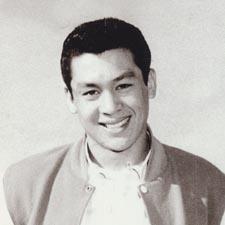 High school athletics allows the best all-around athletes the challenge of participating in three sports seasons. Randy Autentico managed to squeeze in a fourth sport in the spring, and lettered in football, basketball, baseball and track during his senior year at Antioch High School. The 1956 graduate was First Team All-Diablo Valley Athletic League and MVP for the Panthers in baseball that year, ending a three-year run as a varsity starter. Although he played only two complete league games in football due to an early season injury in 1955, it was enough to earn Honorable Mention All-League. Randy was team captain for the season and for the annual Antioch vs. Pittsburg “Big-Little Game” match-up, in which he threw a 26-yard touchdown pass. His season efforts earned the AHS “Most Courageous” award in football. Randy was a starting guard on the basketball team, and went on to hit .333 for the season in baseball, including two home runs in one game against Acalanes High. When he wasn’t running around bases, Randy was jumping over hurdles. His performances in the 180-yard low hurdles event earned a second place at the Davis Invitational Track Meet in 1956, and a fifth place overall in Contra Costa County. Randy was also part of AHS’s 880-yard relay team. Following high school graduation, Randy chose to focus on football at East Contra Costa Junior College (now DVC) where he was a starting running back in 1956, playing in the same backfield as 2009 Antioch Sports Legends inductee Grover Garvin. He took a break from football, and then began two years of military service in 1959, playing quarterback for the U.S. Army’s Berlin Bears. He was named First Team quarterback for the Army’s All-Northern League in Europe in 1960. Following his Army service, Randy attended City College of San Francisco and continued playing quarterback as a starter. The seasoned athlete was a walk-on at Brigham Young University in Utah in 1963. The Cougars recognized his abilities and offered him a scholarship for his remaining year of eligibility, allowing Randy to start two games at tailback in the “single wing.” Sports became Randy’s lifelong vocation as a teacher and coach. Following his playing days, the four-sport Panther began his coaching career in Idaho and Utah, then returned to his home turf as Park Junior High’s main coach for four different sports; football, wrestling, basketball and track between 1972-1979. He coached several sports at Antioch High and Concord High in the 1980s, and then moved on to coach at the newly built Deer Valley High in Antioch during the 1990s, retiring as an educator in 1999. He returned to Antioch High for two additional years as Head Football Coach in 2008 and 2009.