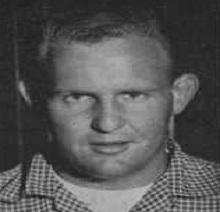 The Most Outstanding Athlete at Antioch High in 1956 was also the top campus political leader. Student Body President Ray Harrington was captain of the 1955-56 football team doing quadruple duty as tackle, fullback, middle linebacker and later on as a signal-caller, chosen by coach Brooks Golden to direct the team when a broken collarbone put quarterback Randy Autentico out of commission for the year. Randy recalls that Ray was “one of these guys who could dominate. A big player over 200 pounds was unusual back then. He was strong AND he could run.” Ray had the respect of teammates who chose him co-captain of the Antioch-Pittsburg Big-Little Game. He was football MVP and the recipient of the Joe Harlan Memorial Trophy, awarded by the Antioch Quarterback Club. Ray was a varsity starter as a sophomore and junior until a dislocated elbow sidelined him for the season following the second game of the year, played against McClymonds High. Ray was named by an Antioch Daily Ledger sportswriter as “the best lineman in the county,” a “big strong kid who could tackle and block like a demon…and perhaps more important THINK.” Ten years later the local paper’s sports writers selected him as part of the Antioch Ledger’s “Cream of the Crop” team made up of the best players between 1950-1967. Some of Ray’s biggest achievements were playing offense and defense in two prestigious all-star games featuring top high school players in California; the North-South Shrine Game played in the L.A. Coliseum before more than 56,000 spectators and the East Bay-West Bay Game in Kezar Stadium. Ray was placed on the Shrine game squad only a week before practice began, but made himself valuable by taking part in 13 defensive plays. The three-year “Block A” letterman in football also received varsity letters for two years: as a shot putter in track and field and as a guard on the basketball court. Following graduation, Ray accepted a prestigious football scholarship to Stanford University, where he played on the starting line of the undefeated freshman team. In that era players were required to play both defense and offense. Filling the bruising jobs of left guard and nose guard left Ray with three concussions. As a red shirt sophomore, Ray received seven more concussions and was advised by the Stanford team physician that he needed to give up his football career or face permanent injury. Ray then left Stanford during his senior year and began a career with the U.S. Postal Service. The father of 12 retired as postmaster of Glendale, California in 1992 and continued his involvement in many community benefit activities in Paradise, California.