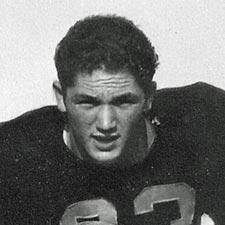 Antioch produced many fine football players in the 1950s, but Rich Elliott remains as one of the most revered. The 6-foot-2, 200-pound Panther was chosen to quarterback for the North in the 1954 North-South Shrine Game, played before 39,363 fans in the Los Angeles Coliseum. The third annual Shrine Football Classic, held as a fundraiser for the Shriners’ Hospitals for Crippled Children, featured the 50 top prep players in California, nominated by sportswriters from throughout the State. Rich was the first Antioch athlete ever chosen for the Shrine honor, and shares the distinction with only three others: Ray Harrington, Ron Pritchard and John Olenchalk. Rich had a phenomenal academic year – earning a perfect 4.0 grade point average – and an incredible football season in 1953. He racked up 57 points, more than a quarter of the team’s league-leading 220 points. The virtual one-man team played the positions of quarterback, halfback, fullback, kicker and linebacker. In one great non-league game against Yreka High, Rich had four touchdowns, throwing for two and running for two. Named “Back of the Year” by league coaches, he was also named First Team All-Contra Costa County Athletic League as a fullback and First Team All-Metropolitan by the San Francisco Examiner. At the end of the school year, he was awarded the Joe Harlan trophy, given to the school’s most outstanding football player. Rich played varsity football for the Panthers as a junior as well. His injury-shortened season included four TDs: two rushing and two throwing. At the important Big-Little Game against the rival Pirates in 1952 – before a league-record crowd of more than 7,500 – Rich broke a bone in his ankle after running an 87-yard quarterback sneak play for a touchdown. At halftime, Rich informed Coach Ralph Riggins he could not play offense, but stayed in the game and played in the second half on defense. “I went back to school on Monday, and thought I had a sprained ankle,” he said. “I didn’t know it was broken until it was X-rayed on Wednesday.” Rich recovered and went on to play basketball and baseball that same school year. Stanford University offered a full football scholarship to the AHS Student Body President, who played for the Stanford freshman team. He earned a varsity letter the next year as a sophomore, but a knee injury ended his football career. Rich graduated in 1958 with a degree in political science and remains married to his AHS sweetheart, Peggy Williams.