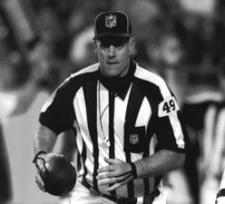 Rich’s path toward a football career began as a standout player at Antioch High School and at the University of Arizona, eventually leading up to his current position as an National Football League game official. The 1972 AHS graduate has worked for the NFL since 2004 as an umpire (#49), earning the privilege of working his first playoff game by his second year – the Wild Card game in 2006 between the Carolina Panthers vs. New York Giants. He was chosen in 2007 to work the NFC Championship (New Orleans at Chicago) and in the 2009 wildcard game (Philadelphia at Minnesota), as well as the wildcard game in 2011 (Pittsburgh vs. Denver). Rich served as an alternate official in the 2008 and 2010 playoff games and was an alternate official for Super Bowl XLV in Dallas for the Pittsburgh vs. Green Bay matchup. Prior to 2004, Rich worked in the NFL Europe League for eight years, highlighted by officiating in the 2004 NFL Europe World Bowl played in Germany. Prior to his stint in Europe, Rich was one of the original officials hired by the newly created Mountain West Conference in 1999. During his five years there, he worked the Alamo Bowl, Holiday Bowl, Humanitarian Bowl and Outback Bowl games. From 1985-1998 Rich officiated in the Big Sky Conference, where he was a umpire for 14 playoff games in Division 1-AA and the National Championship Division 1-AA Game in Tennessee in 1998. The former Panther’s officiating career started at the youth football and then high school level, progressing to the junior colleges, right after he graduated from the University of Arizona with a degree in public administration in parks and recreation. Rich played for the University of Arizona Wildcats for four years on a football scholarship. He was a three-year starter at right defensive tackle, helping Arizona win the Western Athletic Conference Championship in 1974 and 1975. At Antioch High, the Panther football MVP was All-DVAL for both offense and defense and All East-Bay and played offense and defense in the Contra Costa-Alameda All-Star Game. Rich now lives in Tucson, and has three grown sons.