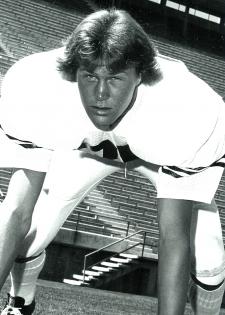 Being slightly more than 6-foot-6 tall offers some great advantages to an athlete who wants to play basketball. That held true for Rich Jones, who became Antioch High’s Most Valuable Player on the varsity hoops team. However, Rich’s multi-dimensional talents allowed him to earn nine varsity letters throughout his three-year prep career between 1972-1975, in which he played on five Diablo Valley Athletic League championship teams. It’s a high achievement that the Co-Athlete of the Year for 1975 graduated with an overall 3.8 GPA, since he never had a break during three straight three-sport years playing football, basketball and running track. Over his entire prep career, “I started in every game in football, and every game in basketball except one,” Rich said. However, it was the pigskin that was his passion. “I always wanted to play football ever since I was a little boy and played for the Belshaw Bullets in the Antioch Junior Football League. I was always the tall lanky one.” As a towering sophomore (already 6-foot-5, but only 180 pounds) Rich was the top rebounder and scorer on the basketball team and earned second team All-DVAL honors in both track and football. He led the league in interceptions. By his junior year in 1973-74, Rich had moved up to First Team All-DVAL recognition in football and was again named to the Second Team All-DVAL in track and field. It was in track that Rich made a lasting impression at AHS. At the end of his 1975 senior year, the speedy Panther team captain broke four records; the high hurdles, 180-yard low hurdles, 330-yard low hurdles and high jump, clearing his own height of 6 feet, 6 ¼ inches, which was a record that lasted until 1996. His performance in the 120-yard high hurdles qualified for a berth in the California Interscholastic Federation State Championships. This led to being chosen Most Valuable Player in Track and Field in 1975, the second year in a row receiving the AHS honor, as well as being named the Most Outstanding Athlete of the Chuck Stapleton Relays. On spring awards night that year, Rich also walked away as a two-fisted winner taking home the MVP award in basketball as well. His greatest recognition came through football. The free safety player was chosen All-East Bay First Team as a junior and was a unanimous choice as a senior, selected by the East Bay Prep Writers’ Association. League coaches selected Rich as All-DVAL for both offense and defense. Utah State University was eager to place him on its gridiron and offered a full-ride scholarship. Rich played tight end and safety for the Aggies.