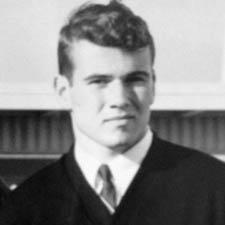 Great achievement in both athletics and academics marks the career of Robbie Adams, a three-sport star and 1966 Athlete of the Year at Antioch High School who went on to earn a Ph.D. at the University of Oregon. Robbie earned multiple accolades in football, but also excelled in basketball, where he was named the Panther MVP during his senior season, as well as being selected Second Team All-Diablo Valley Athletic League. In track and field, he made First Team All-League and All-North Coast for his performance in the shot put, setting what was then an AHS record throw of 57-feet, 7½-inches, a mark that still ranks as fourth on the all-time AHS best list almost five decades later. Panther fans could be forgiven for mistakenly thinking there was a set of Adams triplets on the 1965 football team, since Antioch Coach Bill Snelson started Robbie at offensive tackle and defensive end, and also used him as a place-kicker and punter. The 6-2, 198-pound end was First Team All-DVAL on offense, First Team All-Metropolitan and Fourth Team All-Northern California, the latter two chosen by the San Francisco Chronicle. The football talent pool in the Bay Area must have been quite impressive that year, as future Heisman Trophy winner and Super Bowl quarterback Jim Plunkett, a James Lick High School senior, only rated Third Team All-NorCal. Robbie’s fierce gridiron and academic talents earned recognition in 1965. He was named top lineman on the Bay Area Scholar-Athlete team, chosen from among 10 counties, and Outstanding Lineman from Contra Costa County, and named Top Lineman on the NFL Football Foundation Hall of Fame, Northern California Chapter. Later on, he was an honorable mention on the Daily Ledger’s “Cream of the Crop” team, a selection of the best football players Antioch High produced between 1950-1967. A 3.6 GPA, grouped with being a Boy’s State representative and member of the California Scholarship Foundation, made Robbie a top prospect for Stanford University. He played freshman football there, with Plunkett as quarterback. Robbie was a starter on the final freshman game against UCLA. With the Vietnam War escalating and so many young men being drafted, Robbie said the social upheaval of the era drew his attention back to academics. As for football, “I satisfied myself that I could do it,” and then left the Stanford football program after his freshman season. He transferred to U.C. Berkeley as a junior, earning a degree in rhetoric in 1970. He later earned a master’s degree from CSU Los Angeles and a doctorate degree from the University of Oregon in 1982. He taught speech at Los Medanos College, University of Oregon, and later at Indiana-Purdue, Ft. Wayne. Returning to California in 1985, Robbie began a two-decade career as a Contra Costa County probation officer, earning a Juvenile Justice Award in 2005 for outstanding service. He retired from the county in 2010.