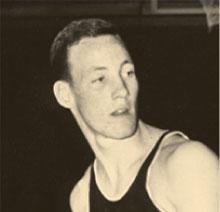 Panther football, basketball, and track teams were dominated by Ron “Bogie” Edwards between 1960-1963. The multitalented Bogie was the DVAL basketball player of the year and league scoring champion. The guard and team captain was a three year starter. Bogie didn’t rest on his laurels, but took up the high jump, winning first in the league and fifth in the Nor Cal decathlon. Bogie was voted AHS’ Most Outstanding Player on the gridiron and earned a first team All-Diablo Valley Athletic League berth on both the football and basketball squads. He was the area’s top rusher in 1963. In 1970, his name became part of the DVAL “All Decade Team” in basketball. His amazing skill earned full scholarship offers; basketball from the University of San Francisco and Pepperdine University, track from San Jose State University and football from Utah State University, where he eventually attended from 1963-1967. Bogie chose Utah because it allowed him to play three sports during his freshman and sophomore years until he settled on just one. He eventually chose to toss a pigskin and it served him well. He was the starting quarterback for three seasons and team captain during his senior year at Utah State, earning Academic All-America honors along the way as well as setting 11 offensive records. This earned a much-deserved spot in the Utah State University Hall of Fame. The Canadian Football League’s Montreal Alouettes took notice and drafted Bogie out of college. That began his professional football career. Bogie tried out for the Denver Broncos. He eventually played for the Continental Football League as the Norfolk Neptunes’ cornerback, earning First Team All-League. Eight years after his pro football career ended, Bogie took on a bigger challenge – the elite Ironman Triathlon – a one-day combined 2.4 mile swim, 112-mile bike ride and full marathon. He competed in two Iron-man events between 1980 and 1985.