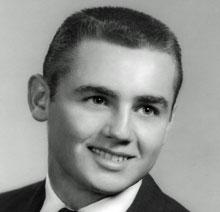 Antioch High School named Ron as Co-Athlete of the Year and football MVP as a senior in 1963 but his gridiron skills were evident from an early age. As an elementary school quarterback for the John Muir Red Devils, he performed a single game feat of five touchdowns, which included a 70-yard run. Football took a back seat when Ron played Babe Ruth baseball for the Anthony Buick team as a young teen. He was a 10-0 pitcher and led the league in strikeouts with 117. He was also the second best hitter in the Delta Division. Ron’s football career began as an Antioch High Panther in 1961, when he was a two-way starter. The junior earned Contra Costa County Player of the Week honors in a game against Pleasant Hill High. His high school senior year accomplishments include being named a top player in Contra Costa for two different positions; First Team All-County defensive safety and Second-Team All-County as a halfback for which he averaged 5.8 yards per carry. Ron was chosen as “Most Courageous” at AHS by his coaches and teammates. He would repeat that MVP honor earned in high school while at DVC and later on be named Outstanding Back at California State University, Chico. After AHS graduation, Ron became a starting running back and wide receiver on the Diablo Valley College football team, and earned All-Golden Gate Conference status as a college sophomore. He was captain of the Viking baseball team as well. The two-year starter was honored by DVC with the Norseman Award for Athletics, given to the best all-around athlete at the community college. Following DVC, Ron transferred to California State University, Chico, where he would continue to excel on the gridiron. In his first home game against Southern Oregon State, the very first time he touched the football resulted in an 84-yard kickoff return for a touchdown. The following game against California Western University (now called Alliant International University) featured his carry of a 94-yard punt return for a touchdown. Being sidelined with knee surgeries for the entire 1966 season at Chico State did not mean defeat for the 1963 Antioch High grad. The 5’ 7” wide receiver – who earned the nickname “The Flea” – came roaring back the next year to become fourth best receiver in the nation with 73 total receptions during his final college year, setting a conference record. The Wildcats gave him the President’s Award for best athlete at the campus for the 1967-68 school year. He capped his football career with a 49-yard touchdown against Humboldt State on the last play of the game and was named to the All-Far Western Conference team. Although he’s being honored for his football accomplishments, Ron was a three-sport athlete at AHS; a three-year baseball starter and a two-year basketball starter: In baseball, he pitched a three-hitter in a 12-0 shutout, struck out nine and blasted a 360-foot grand slam against arch-rival Pittsburg. Ron was AHS’ Baseball Player of the Year and was First Team All-DVAL as a junior and senior baseball player. As a basketball guard he earned East Bay Player of the Week. During his junior year, Ron played a key role in beating the PHS Pirates to end a 17-year losing streak. His extraordinary football skills were recognized several years later by the Antioch Ledger, when local sports experts selected him to be on its prestigious honorary “Cream of the Crop” team composed of the best football players to come out of Antioch between 1950-1967. He was one of only two players to be chosen first team for both offense and defense teams. Ron contributed six years to coaching in Antioch schools, including head football coach at what was then Park Junior High, leading the boys to a 8-0-1 season, and spending a year as head junior varsity coach at Antioch High, ending with a 7-2-1 season. He was assistant coach at AHS under Marv Comstock for two football seasons in 1973 and 1974, in which the team won the DVAL championship.