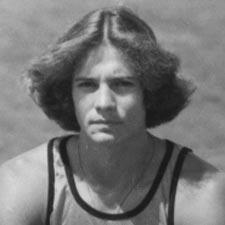 Runners win by getting from point A to point B in the fastest time possible, however Rudy Viramontes had to jump over 39-inch wooden barriers before he got to the end of each race. The best hurdler in Antioch High School’s history remains the school record holder in the 110-meter high hurdles. His race time of 14:35, also a meet record, beat runners from 40 other schools at the Gilroy Invitational. Rudy also set a single race record in the 120-yard high hurdles in 1981 (14.4 seconds) that still stands after three decades. Rudy is the only AHS runner to be the Diablo Valley Athletic League’s first place champion five separate times: three consecutive years as the 120-yard high hurdles champion and two consecutive years as the 330-yard low hurdles champion. The 1981 graduate’s initial league championship came during his sophomore year in 1979, for the 120-yard event. Before entering AHS, Rudy competed as a 9th grader at Antioch Junior High School, breaking the AJHS record with 42 seconds flat in the 330-yard low hurdles – the first time he had ever run the race. The second and third league titles came during his junior season, when Rudy won first place in both the 120-yard high hurdles and the 330-yard low hurdles. AHS named him the Most Valuable Player on the boy’s track and field team. It was as a junior that Rudy qualified for the California Interscholastic Federation state meet, running the 300-meter low hurdles in 38.5. High schools were required to phase in the use of metric distances between 1979-1981. Schools and leagues were using yards, while higher-level competition had transitioned to meters. Rudy continued to improve during his senior year, becoming the North Coast Section Division II first place champion in the 110-meter high hurdles and adding his final two DVAL championships: finishing first place again in the same events from the previous year; 120-yard high hurdles and 330-yard low hurdles. The 330-yard event was discontinued in 1981, and Rudy ushered it out in style with a time of 37.2, becoming the permanent AHS record-holder. The team captain was AHS’ MVP for males in track and field as a senior, running on the 400-meter sprint relay team and the league champion mile relay team with Alan Mengenhauser, Tyrone Mendez and Jim Hill, whose 3:22.7 is the second best time in AHS history. Another notable senior performance for Rudy included coming in second place in the 300-meter low hurdles at the NCS Meet of Champions. The hurdler continued perfecting his skills at LMC, where he set a record of 52.3 in the 400-meter hurdles in 1982.