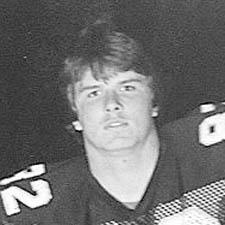 Scott Freier needs a room-sized display case to shelve all the awards he accumulated for Antioch High School in the late 1980s. An extraordinarily gifted athlete, the tight end was First Team All-Diablo Valley Athletic League, All-East Bay, SF Examiner First Team All-Bay Area, and All-Northern California in football. The 6-4, 235-pound lineman’s accomplishments while on the Panther roster include making 22 catches for 340 yards (averaging 15 yards per catch) during his senior season: most were not easy catches, as Scott made connection with the ball, tossed by quarterback Jason Verduzco, surrounded by a traffic jam of opponents. Scott was part of a massively sized offensive line – average player weight was 252 pounds – that led the DVAL in total offense in 1985, helping running back Bryan Hill rush for 1,120 yards and 11 touchdowns. Scott is also a member of one of the most exclusive clubs in Antioch football history: He is one of only a handful of AHS athletes to be a part of the “Super Sixty” – a gathering of the best high school football players in California chosen for the prestigious Shrine North-­‐South All Star Football Classic played at the L.A. Coliseum. His two catches totaling 19 yards during the 1986 Shriner game put a sweet end to his prep career, but Scott’s life as an athlete was far from over. Following his senior football season, Scott played baseball at AHS, where he was an All-­‐DVAL and Second Team All-East Bay pitcher. His .407 batting average, 1.80 ERA and 9-3 record earned an invitation to the Philadelphia Phillies camp, but he declined the offer. He also played varsity basketball as a sophomore on the NCS-qualifying Panther team that beat Pittsburg three times that year, but every coach in the Pac-10 and several Ivy League schools sought his services on the gridiron. In a 1985 local news article, it was clear that Scott was one of the most sought-after football players to ever come out of Northern California. “Several of the (Pac10) conference’s head coaches have visited his home,” the article said, and those same coaches offered him full five-year scholarships, eager to pay for an extra redshirt year to entice him to sign. Scott’s family endured several calls each day from coaches around the country seeking his services, including Yale and Nebraska. He received more than 20 scholarship offers. Scott accepted a full-ride scholarship to play for the powerhouse University of Southern California. At USC, Scott played three positions; offensive guard, center and tight end for three years, making three consecutive appearances in the Rose Bowl between 1988 and 1990. He suited-up and accompanied his team to the Citrus Bowl in 1987 as a freshman and was a pitcher for the USC freshman baseball team. Following his football career, Scott settled back in his hometown of Antioch, and proudly wore a different uniform: Antioch police officer, a career from which he recently retired in 2012 with the rank of sergeant.