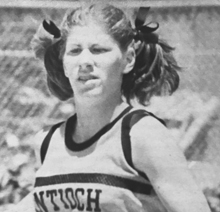 She was the first female AHS athlete to ever qualify for the California Interscholastic Federation Track and Field championships, doing so twice, and went to National AAU Junior Olympic Cross Country Championships. Antioch High was a grade 10-12 school at the time Shane attended in the 1970s and she made her mark in track and cross country each year. As a sophomore, she helped set a Panther track record as part of the girls’ mile relay team and ran what was then the second fastest two-mile cross-country time ever by an AHS female of 12 minutes, 27 seconds. In cross-country, Shane improved each season in the DVAL Championships, finishing third place as a sophomore, second place as a junior and finally first in the league in her senior year, winning every dual meet race but one over a two-year stretch between 1977-1978. During the 1978 season, Shane helped her AHS cross country team race to a perfect 8-0 meet record and DVAL title. Along the way she broke her own AHS 2-mile record with a blistering 11:11 second place performance in the NCS-4A regional meet and went on to finish ninth at the North Coast Section Championships and 16th at the Nor Cal Championships. The one-mile and two-mile track records set by Shane in 1978 and 1979 stood untouched for more than 20 years at AHS. As a junior, her 5:12.5 mile was set in the trials of the North Coast Meet of Champions and her two-mile mark of 11:12.1 occurred in the NCS 4A Championship. She went on to place fourth in the North Coast Section Meet of Champions and 15th at the CIF State Track Meet in the 2-mile; as a senior she placed third at North Coast in the same event and 20th at CIF. Her outstanding performances in track and cross country cemented Shane being selected as Most Valuable Senior Female Athlete in 1979. Shane’s honors include: All-East Bay in cross-country and track and All Nor-Cal in cross-country as a senior, three-time AHS MVP for cross country and two-time MVP for track and field. Following her stellar high school running career, Shane competed for California State University, Hayward (now Cal State East Bay). As a freshman she helped the cross-country team win a Division 3 National Championship. In 1984 she was ranked as one of the Top 10 best female track performers at CSUH in the 3000, 5000 and 10,000 meters. She was a two-time qualifier for the NCAA Division II track championships in the 3000 meters in 1983 and 1984.