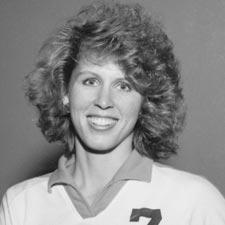 This three-sport star played varsity basketball, volleyball and softball as a junior, and then split her focus between volleyball and softball as a senior, earning First Team All-Diablo Valley Athletic League honors for both sports and filling her letter jacket with five varsity “Block A” patches. Sharon Christianson, along with twin sister Karen, played on AHS’s most successful softball team in school history, winning the North Coast Section championship in 1984 as the culmination of a 28-1 season. The playoff victory was cemented by Sharon’s key hit. Sharon follows her sister and the 1984 softball team, who were inducted into the Antioch Sports Legends Hall of Fame in 2011. The outfielder had an overall .410 batting average in league play, the highest on her team. Her three hits against rival Pittsburg High helped propel the team to a first place league finish. The 5-foot-9 outside hitter was the volleyball team’s Most Valuable Player for two years, in 1983 and ’84, and team captain. The Big “C” Athletic Club of Concord named her an Athlete of the Week in the DVAL. Following high school, Sharon continued as a two-sport athlete at Sacramento City College for two years, earning First Team All-Camino Norte Conference in volleyball in 1985. The team captain was also chosen as MVP in her second year. The softball outfielder was team captain for the SCC softball team, winning the Camino Norte League Championship with a 34-9 season. Sharon transferred to California State University, Sacramento and played two more years of volleyball and softball. In her senior year, the Hornets named her the “Most Inspirational Player” in volleyball. She played with her team in the National Collegiate Athletic Association’s Division II championships in 1987, where the Hornets placed fifth. Sharon later achieved a degree in nursing from California State University, Chico in 1992. In 2006, Sharon received her master’s degree in nursing, working at Santa Barbara Cottage Hospital and teaching nursing at Santa Barbara City College.