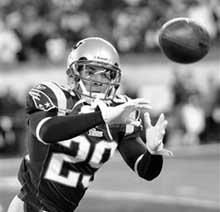 The Antioch native’s trajectory from unrecognized high school recruit to Super Bowl XLVI in the span of five years makes Sterling Moore a “1 in 10,000 player” according to Deer Valley High Football Coach Rich Woods. “Football didn’t even enter my mind” until my senior year, Moore told journalists. His single varsity season in 2006 at DVHS resulted in 10 tackles, 12 assists and one fumble recovery in eight games. However, he was a member of the Wolverines’ 10-1 Bay Valley Athletic League championship team, playing alongside Taiwan Jones, a future Oakland Raider running back. Coach Woods said Moore wasn’t singled out for any league honors, but (was) “a smart football player. What he lacked in speed, he made up for in reaction time.” Moore continued playing football at Los Medanos College in Pittsburg in 2007 for the Mustangs before transferring to Laney College in Oakland, where the defensive back was All-Golden Gate Conference and an All-California First Team selection made by the Community College Football Coaches Association. Moore accepted a scholarship to Southern Methodist University in Texas as a junior, and had to prove himself once there. “I was a two-star recruit,” he said, speaking to a Boston newspaper, “I had to climb to the top.” And climb he did, making 46 solo tackles, 13 assists and three interceptions over a 19-game career, including SMU’s post-season victory in the Hawaii Bowl. The 5-10, 190-pound Moore remained undrafted following his college career, but signed with the Oakland Raiders on July 28, 2011 as a free agent. The next several weeks became a roller coaster: signed four times and cut a total of three times from two different NFL teams’ 53-man rosters, uncertain if pro football was in his future. He was released by Oakland on Sept. 26, then signed to the New England Patriots’ practice squad on Oct. 5, making his first League appearance 11 days later against Dallas. Three weeks later, Moore had his first start on Nov. 13 against the New York Jets at safety, playing the entire game and making his first tackle. He was cut on Dec.10. Four days later, the Patriots changed their mind, re-signing him to their practice squad, then promoting him to their active duty roster on Dec. 23. One week later, Moore had two interceptions, one resulting in a 21-yard touchdown return, in the New Year’s Day 49-21 victory over Buffalo. That effort earned Moore the AFC Rookie of the Week honor, the first to be won all season by an undrafted player. It was three weeks later, in the AFC Championship Game, that Moore performed 27 seconds of magic. In what football commentators considered the best moment of the entire NFL season, Moore stripped the ball from Lee Evans’ hands as the Baltimore Ravens receiver was about to make the game-winning touchdown on January 22, 2012. “I saw him catch it and for a second I thought, ‘Oh no, we lost and it’s on me’, ” said Moore in an interview. “But it was all instincts… I didn’t know I knocked the ball out until I saw it rolling on the ground.” Moore followed that incredible play by breaking up the Ravens’ next pass attempt in the final three seconds, earning the Patriots a ticket to Super Bowl XLVI (where Moore later made three solo tackles). “That was a great play by Sterling,” said Patriots quarterback Tom Brady. Patriots Coach Bill Belichick said of Moore: “He competes hard and he’s a tough kid. He’s got good ball skills.”