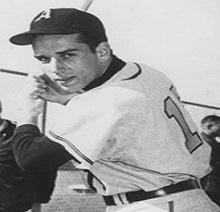 Local sportswriters bestowed several nicknames on Steve, such as “Fearless” or “The Executioner” due to his consistently fantastic performances spanning nearly a decade in Antioch baseball leagues. Success on the diamond began in Little League. In 1959, Steve socked two grand slams for the Campbell Comets to beat the Mt. View Rockets in a 17-4 blowout. Steve’s prowess with a baseball bat continued as he matured into a teen hitting prodigy. His .547 batting average – with 35 hits for the Reghitto Motors team – led the Delta Division of the Babe Ruth League in 1961. By 1963, Steve was the batting champ of the American Legion Merchants team in Antioch with a .367 average. Antioch High was the next beneficiary of his skills between 1963-65. As a starting varsity outfielder his sophomore year, Steve hit .296 and helped lead the Panthers to a 10-4 record. He improved his overall batting average to .393 as a junior, again putting the Panthers at the top of the Contra Costa Athletic League, with an 11-3 record, sharing the title with Mt. Diablo High. He was named First Team All-Contra Costa Division/Diablo Valley Athletic League outfielder. Steve’s bat came roaring back even stronger his senior season. In the opener against Liberty, the centerfielder went 4 for 5, with two homers, including one major-league size whopper that soared more than 400 feet. He ended the season as co-league batting champion hitting .432. Steve was AHS’ MVP and was the only Antioch player named to the First-Team All-DVAL squad. The Panthers became co-winners of the CCD of the DVAL in 1965, and held almost every team statistical record: hits in a single game (15) and highest number of team members batting over .300, with six. A punishing 13-5 win over Ygnacio Valley earned Steve his “Executioner” nickname, bestowed by his teammates for almost taking the head off an opposing pitcher with a line-drive. At the Tri-Club Athletic Awards in May 1965, an event co-sponsored by the Pittsburg, Antioch and Pacifica athletic booster groups, Steve was honored as one of the three most outstanding baseball players in the DVAL. Baseball wasn’t the only sport in which Steve excelled. He captained the AHS varsity basketball team as a junior and was a two-year. Steve played American Legion baseball in the summer following his senior season. When not swinging a bat, he was swinging a golf club, and scored a hole-in-one in July of 1965 on the Antioch Municipal Golf Course, six weeks after graduating from AHS, the first of his six lifetime holes-in-one. He spent his first two post-prep years playing centerfield at Diablo Valley College, earning a First Team All-Golden Gate Conference berth in 1967 while posting a .393 season average. He captained the Viking team and led his teammates with 22 hits. He played his senior year at San Jose State University, but a back injury ended his baseball career in 1969.