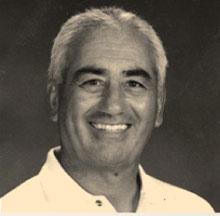 Steve was a true three-sport high school athlete, but wrestling became the path to individual glory in college and led to national recognition as one of the top prep coaches in the country. This Antioch High School Class of ’67 grad grappled all four years on the varsity squad: as a junior he made All-Diablo Valley Athletic league, as a senior, he was voted Outstanding Wrestler in the DVAL League Tournament. Steve placed third in the Northern California state meet, with the AHS team finishing fifth. In 1966 he was co-captain of the Panther varsity football team, which was league champion that year under Bill Snelson with an 8-0-1 record, the first unbeaten AHS team since 1945. He was voted first team All-DVAL, All-East Bay, and played in the Contra Costa-Alameda All-Star Game, as well as earning the “Most Courageous” player award from AHS. Steve was also team captain on the varsity baseball team in 1967. The prep standout continued on to Diablo Valley College where he earned honors in two sports, wrestling and football. Steve was a two-time Golden Gate Athletic Conference wrestling champ and earned junior college All America honors. He was named All-League first team defensive back in football in the Golden Gate Conference in 1968. Steve transferred to Portland State University, where he earned a third place in regional competition and a second place in the Las Vegas YMCA nationals. After college, Steve began his coaching career at Merced High School and then came home to Antioch. He is the only coach in the state to have led two different high schools to California Interscholastic Federation Wrestling Championships. Steve’s highest recognition was being named the United States Wrestling Federation Coach of the Year in 1980, an honor that encompasses all prep, college and open club teams in the United States. His other coaching honors include: National High School Athletic Coaches’ Association Regional Coach of the Year (1982 and 1987), California Coaches’ Association High School Wrestling Coach of the Year (1982 and 1987), Big C Athletic Club Coach of the Year (1987) and induction into the California Wrestling Hall of Fame in 2000.