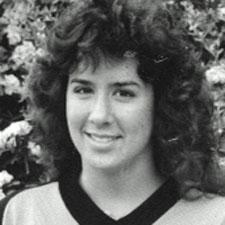 Why call it a sports record book, if there’s only one name listed? Powerhouse pitcher Sue Cardinale dominated softball at Antioch High in the 1980s, setting 12 school records. “She was just overpowering” according to the losing coach in the 1986 North Coast Section finals. Sue’s AHS records were; Most Strikeouts in League (132); Most Strikeouts in a season (236); Most Career Strikeouts (361); Most No-Hitters in a Season ( 3); Most Career No-Hitters (7); Most Shut-outs in a Season (8): Most Career Shut-outs (18); Lowest League ERA (.38); Lowest Career ERA (.99); Most League Wins in a Season (14); Most Total Wins in a Season (25) and Fewest League Losses in a season (0). Sue was a three-year varsity player, helping her Panther team, coached by Andria Edwards, reach NCS finals all three years. As a junior she was co-MVP for softball and was named by the Contra Costa Times to its All-East Bay team. She was also all-league in the DVAL due to her 20-6 overall season, which included pitching in three consecutive winning games at North Coast, one of which was a 3-1 defeat of Arcata High, a team going into the semi-finals with a 24-0 season. It was during her senior year of 1986 that Sue began to strike fear into the hearts of batters who faced her – especially the 132 she struck out during the perfect 14-0 league season. She had three no-hitters, seven one-hitters and 25 total wins for the year that culminated in an NCS championship against an unlikely opponent – Pittsburg, both east county teams having made it to the playoffs out of a field of 149 high schools. Sue’s pitching prowess was confirmed in the first NCS semi-finals game: a perfect 14-0 win against Alameda achieved in five innings. She went on to pitch a total of 31 scoreless innings at the 1986 NCS playoffs, gave up only eight hits and struck-out 40 batters, finishing with a 25-2 total senior record and a combined record of 45 wins and 8 losses over her last two prep years. Sue earned East Bay Softball Player of the Year, presented to her by baseball great Joe Morgan; DVAL Softball Player of the Year (as a junior and senior) as well as being named the Contra Costa Times and Oakland Tribune’s Softball Player of the Year as a senior. When not pitching for AHS, Sue played on a traveling team with the American Softball Association which took second in the nation. But softball wasn’t Sue’s first love, it was horses. The high-achiever was a Junior Grand National Champion while she was barely out of elementary school. Her awards for riding include Pacific Coast and Northern California championships. But it was softball that earned Sue a scholarship to play at the National Top-20 ranked University of the Pacific in Stockton, where she was a four-year starter, earning an MVP in her senior year. Her record performances remain in the top 10 at UOP: Pitching Appearances (103), Games Started as a Pitcher (90), Innings Pitched (670), Most Strikeouts (318) and 7th overall for her ERA of 1.30. Following her graduation in 1991, Sue continued her education at the University of San Francisco where she earned a B.S. in nursing.