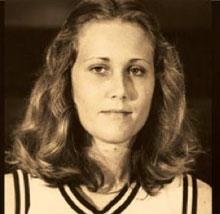 An Antioch High alumna never received an athletic scholarship until Sue Cottier came along. The 6’1” basketball player was part of the Mario Tonin-coached 1976 league championship team that crushed the four-year undefeated 26-game winning streak of Clayton Valley High. Sue played varsity center all three years of high school, 1974-1976. She was MVP in 1975 and Co-MVP as a senior in 1976. Her high game was 27 points and she averaged 14 points and 14 rebounds per game. Sue first attended DVC, earning All-League in 1977 and ’78 as well as Most Valuable Player both years: high game of 35 points, season average of 19 points per game. The University of San Francisco offered her a scholarship and at USF Sue pushed her team to second place in the Nor-Cal League. The 1979-80 Lady Dons won the AIAW (Association for Intercollegiate Athletics for Women) Western Small College Regionals – USF’S final year of eligibility – guaranteeing a berth in the AIAW National tournament. Sue’s skills placed the Lady Dons first in the Nor-Cal League in 1979-80: 12th best in the nation and #1 seed in the AIAW’s Region 8, Division 1 group, beating Stanford and UCLA along the way. Basketball continued to play a primary role in Sue’s life. After earning a B.A. at USF, a teaching credential at St. Mary’s and a special graduate credential in adaptive P.E. at Sonoma State, she came back to Antioch as a coach and teacher. During her 12-year AHS tenure, the women Panthers were BVAL Co-champions in 1988-89, and placed second at North Coast in 1989, ’90 and ’91. Top players Vanessa Selden and Stacey Johnson learned their basketball fundamentals from Sue. Her attention is now turned to teaching P.E. to disabled K-12 students in the AUSD.