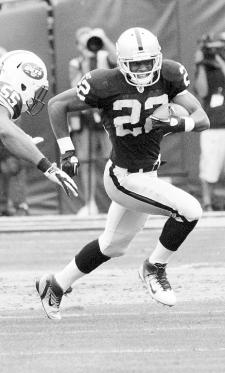 The 2007 Deer Valley High School graduate was the Contra Costa Times Player of the Year and selected by the San Francisco Chronicle for its First Team All-Metro honor. The two-way starter set a Wolverine single season record of 19 touchdowns and rushed for 1,466 yards, averaging 9.3 yards per carry. He had 37 tackles and led the Wolverines to a 10-0 regular season record and the Antioch school’s first Bay Valley Athletic League title since it first fielded a varsity football team in 1997. Taiwan received a scholarship to Eastern Washington University, but did not play until his sophomore year. He had an 87-yard touchdown run on his first collegiate carry as a junior in 2009 and set a school record in 2009 with a 96-yard TD run against Idaho State. He suffered a broken foot that kept him from playing in the semifinal and championship games but managed to have a banner year in 2010, rushing for 1,742 yards and 14 TDs in 12 games. The season ended on a high note as Taiwan was selected to several all-star teams: NCAA Football Championship Subdivision All-America as selected by the American Football Coaches Association (first team), Associated Press (first team) , College Sporting News (first team) , and was the Big Sky Conference Offensive Player of the Year. He currently holds the EWU school record for all-purpose yards per game (162) and has a college career high of 5,021 all-purpose yards. Twelve times in his career he eclipsed the 200-yard mark in all-purpose yards and had a career high 230 yards in a 38-31 victory over North Dakota State. In April of 2011, more than four dozen NFL scouts, coaches and executives migrated to the Los Medanos College stadium in Pittsburg, Calif. to watch a solitary Taiwan prove he had the raw talent to make the NFL. San Francisco 49er coach Tom Rathman described the gathering as the biggest attendance for a private workout he had ever seen. Taiwan did not disappoint, running the 40-yard dash in a dazzling best of 4.33 seconds. The 6-0, 195-pound running back was chosen by the Oakland Raiders in the fourth round of the NFL 2011 draft, the 125th overall pick, allowing him to return to the Bay Area to wear the silver and black as a Raider. In a preseason game, Taiwan scored a 22-yard touchdown and rushed for 81 yards on 13 carries against the New Orleans Saints. His NFL running back debut in the backfield came on September 18, 2011 against the Buffalo Bills with a four-yard carry. Taiwan, playing on special teams and specializing in kickoff returns, recovered his first NFL fumble in a victory against the New York Jets one week later. In an emotional game on October 9, 2011, one day after the death of Raiders owner Al Davis, the 23-year-old recorded a solo tackle in a 25-20 win over the Houston Texans.