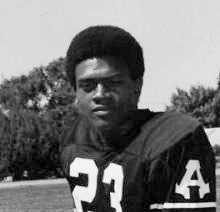 Antioune “Tony” Lang was only a sophomore, but his 94-yard kick-off return for a touchdown late in the 1976-1977 season proved that the Antioch High varsity football squad had itself a prodigy. In his first varsity start at halfback in the very next game, Tony again exploded across the gridiron with a headline-grabbing 240 yards on 18 carries, including two touchdown runs of 16 and 63 yards respectively. In the 1976 season finale, Tony proved his earlier performances were no flukes, rushing for 154 yards on 16 carries, which included a 58-yard touchdown run. Those two final back-to-back performances totaled 394 yards and three touchdowns, clearly putting Tony on the path towards being one of AHS’s top running backs. This was not the first time Tony had spectacular single-game performances. During his freshman year, while attending Antioch Junior High, Tony rushed for 295 yards against College Park High, and ended the 1975-76 season with a total of 1,377 rushing yards. He was voted the Most Valuable Senior Athlete at AHS due to his performances in both football and track, and was awarded the Flecto Sports award as the outstanding prep athlete of the week in Contra Costa County on two separate occasions. The fleet-footed 5’9’’ 175-pound half back was voted First Team All-DVAL in 1977-78 for his 594-yard rushing performance during the season, which included 106 yards and four TDs against Mission San Jose in the North Coast Section Championship game. During his senior year in 1978-79, Tony rushed for 570 yards – part of the 1,596 he amassed over a three-year AHS varsity career – even though being sidelined for four games due to a fractured vertebrae in his lower back. His contributions still made the difference to catapult the Panthers to the DVAL Championship title. Panther fans were ecstatic to have Tony on their side for the annual Big-Little Game match-up in 1978. Tony rushed for 177 yards (151 of them in the first half) on 18 carries, including touchdown runs of 29 and 77 yards respectively, to beat long-time rival Pittsburg High 18-16. Daily Ledger sports writer Debbie Carvalho reported that it was a memorable night for more than 6,000 fans who watched Tony “cut to the right from the left sidelines that left the three Pirate defenders out in the cold,” during his 77-yard TD run. Tony’s speed was also an asset to the track team. He set an AHS record in the 220-yard dash on a curved course during the CIF meet in Los Angeles as a sophomore, running a hand-timed 21.70, making him the fourth best performer in the event for the Panthers and setting a personal best. Track coach Mike Hurd said Lang was thought to be the only sophomore to make it to the state level in track and field in Antioch history. As a senior Tony ran the 440-yard relay with teammates Tim Crumpler, Glen Davis and Alan Sowell and the individual 440-yard race at the state level. “His biggest strength is his willingness to work hard. You find a lot of talented kids who aren’t willing to do that,” said Coach Hurd. Tony is one of six Antioch High athletes to have run a 9.9 second 100-yard dash. Tony, a scholar and leader as senior class president, got the attention of the University of the Pacific, which offered him a football scholarship. In one notable performance against Boise State, Tony rushed for 61 yards and had a nine-yard TD run. For his superior game against U.C. Davis on Sept. 11, 1982, the UOP Quarterback Club named Tony its Player of the Week. After football, Lang briefly served in the U.S. Army and returned home to eventually work for Dow Chemical.