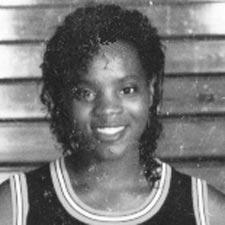 “Vanessa is the best female basketball player that has ever played at Antioch High.” That’s the opinion held by Coach Sue Cottier. She should know. Cottier was Vanessa Selden’s coach for four years and the first female basketball player to be inducted into Antioch Sports Legends Hall of Fame in 2008. Vanessa is unquestionably the best scorer to ever wear black and gold; she still holds the all-time career record – male or female – of 1,867 points at Antioch High. She set a state record for steals in one season (252) in 1989, which currently ties for fourth place in the all-time best ever recorded in California high school girls sports. Her senior year steals place her in the top 20 of all-time national high school record holders. She had 674 career steals in 97 games, which put her at second place in California in 1989. Vanessa’s accomplishments have yet to be rivaled by any other female in Panther hoops’ history. She broke every existing girls basketball scoring record over her four years on Antioch’s varsity team – becoming an easy choice for MVP – averaging 19.9 points per game as a senior in 1989. Additional honors include First Team All-Bay Valley Athletic League as sophomore, junior and senior, leading the Panthers to three consecutive North Coast Section appearances. She was a unanimous choice for All-East Bay, as well as East Bay Player of the Year. Vanessa went on to be chosen by Cal-Hi Sports for its First Team All-State. Recognized as a “great and unselfish leader,” according to Coach Cottier, Vanessa helped the Panthers rack up a 26-6 record – the most wins for a basketball team in school history – and a shared Bay Valley Athletic League title in 1989. Vanessa’s prep career scoring average of 19.2 points per game included six different games with 30 or more points, including a career high of 35 points, achieved twice. She averaged 8.4 steals and 4.3 assists a game her final year. Heavily recruited, she chose the University of Oregon where Vanessa was a starter and became the Ducks’ first player to land on the Pac-10 All-Freshman team in three years. The squad’s most valuable newcomer accumulated the most steals (52) in three years. Vanessa is Oregon’s third leading all-time scorer, averaging 16.2 points per game during the conference season. She holds the record at U of O’s McArthur Courts Arena for the most assists in one game (14), which occurred against New Mexico State in 1990. After her collegiate years, Vanessa had the opportunity to play professionally in Barcelona, Spain; Tasmania, Australia; and on several teams in Germany. Due to a chronic knee problem, her career ended, but not her passion for the game. She is the founder and president of the Northwest Magic girls basketball program in Puyallup, Washington.