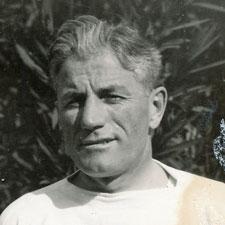 Antioch High’s Eells Field was officially named in 1957 to honor a man who brought football prominence to this then tiny Delta town in the 1920s. In a plaque dedicated by the Antioch Rotary Club, Dutch Eells is called “a builder of men.” Walter Herbert Eells was born in 1898 in Nebraska and settled in San Diego where he attended high school. He was recruited to the University of California, Berkeley and played football between 1918 -1920 and baseball in 1920. Dutch was a member of the undefeated “Wonder Team” that wiped out Ohio State 28-0 to earn Cal’s first Rose Bowl victory in 1920. The “Wonder Team” earned its nickname for trouncing Northern California rival St. Mary’s 127-0 and its overall season scoring of 537-14. Dutch settled in Antioch after college to work at Fibreboard, where he had a 40-year career, and began grooming a community football team whose dominance would overshadow the accomplishments of his Cal teammates. In 1957, a newspaper writer marveled at the ability of Antioch – a town of not quite 4,000 residents – to produce enough talent to beat college teams and go up against pro squads in the fledging NFL when it was common for the early pro teams to take on amateur challengers. Eells’s Antioch American Legion team was made up of talented young men who thrived under Dutch’s leadership from 1924-1937: 87 wins, 16 losses and 6 ties, with a total score of 2,223 points to their opponents’ 503. The team eventually disbanded due to lack of willing adversaries – “a victim of its superiority.” Eells’s volunteer coaching of Antioch High varsity football for five years resulted in two league titles – quite a feat since the 1928 team had only 13 players. The modest Eells received many offers to coach professionally, including as Cal head coach, but preferred staying in Antioch. While here, he led the crusade for a city park and is responsible for Contra Costa County’s first lighted football field, at what is now Antioch Middle School at 18th and D streets. Eells, who died in 1970, was described by sportswriters of his time as “the best defensive coach in the country.”