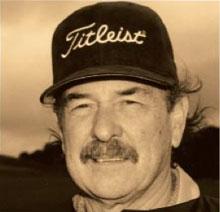 Forty years before there was Tiger Woods, there was Wayne Sleppy. Son of Ollie Sleppy, the head professional at the Antioch Municipal Golf Course, “Champagne Wayne” moved to Antioch at age 12. One year later, in 1952, he shot a hole-in-one at age 13, the first of six in his lifetime, and several times matched his career best round of 65. During his four years of prep play, he lost only two matches. Described by the Antioch Ledger as a “frail, 130-poun d” high school junior in 1956, he placed sixth in the state playoffs. He was a DVAL medalist in 1957, leading his Panther teammates to a huge win over top-seeded Acalanes 5-1 and on to a County championship. Simultaneously, Wayne was playing in the Antioch city championships outside of school, winning as a junior in 1956 against local veteran Joe Rios. En route to winning the 1957 city championship, the AHS senior beat Antioch’s own golf “legend” Elmer Clites by knocking in a hole-in-one on the Par 3 hole #18. His 69 score beat Clites for top medalist before moving on to match-play, defeating top Napa player Howard Shinnerer for the title. Wayne became a PGA professional following high school graduation, working as resident pro at the Long Beach municipal course at age 20 where he met and golfed with movie, TV, and sports celebrities. In 1964, he beat 142 players, including PGA champion Jerry Barber, U.S. Open winner Lloyd Mangrum and World Golf Hall of Famer Paul Runyan, to capture first in the Southern California PGA Tournament in what was described by sportswriters of the time as “the biggest surprise in the 40 years of the championship.” Following that $2,000 win, Wayne’s career included playing in the Bing Crosby “Clambake,” the Los Angeles Open and the San Diego Open.