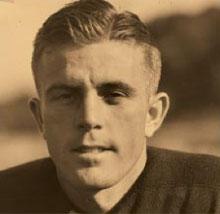 The scourge of polio – which afflicted thousands in the early 20th century – struck Bill Beasley in 1930. Paralyzed for months, Bill dropped out of Saint Mary’s College at the end of his freshman year, but recovered in time to play football as a sophomore. Bill’s inspiring career began at Riverview Union High School, in the same building now housing the Sports Legends Hall. He graduated in 1929, earning All-League honors in football. He captained both the baseball and football teams. During his Riverview years, Bill played under “Dutch” Eells, the namesake of AHS’s football field, who led Bill and his team to a win over Pittsburg High in 1927. In the spring, he played second base and pitched for the baseball team, and played in the American Legion Baseball League. Few people had the opportunity to attend college during the Depression, but a full-ride scholarship allowed Bill to continue in football and baseball – and captained both teams – at St. Mary’s College. He scored three times on kickoffs in his freshman year. As a sophomore, he intercepted a pass vs. Fordham – running 80 yards – that clinched the winning touchdown at New York’s Polo Grounds. Bill was a virtual one-man team, playing halfback, fullback, quarterback and kicker positions for the Gaels. Perhaps his greatest college accomplishment was being in the East-West All-Star game at Chicago’s Soldier Field in 1933, one of the sporting events held during the run of that year’s Centennial of Progress World’s Fair. Baseball also beckoned for Bill, who played second base, shortstop and pitcher for St. Mary’s. Upon graduation he played baseball in the Pacific Coast League. Bill settled in Antioch as general manager for the Fibreboard paper mill and Antioch Mayor between 1950-54. He was recognized by St. Mary’s; inducted into its sports Hall of Fame for both baseball in 1973 and football in 1976.