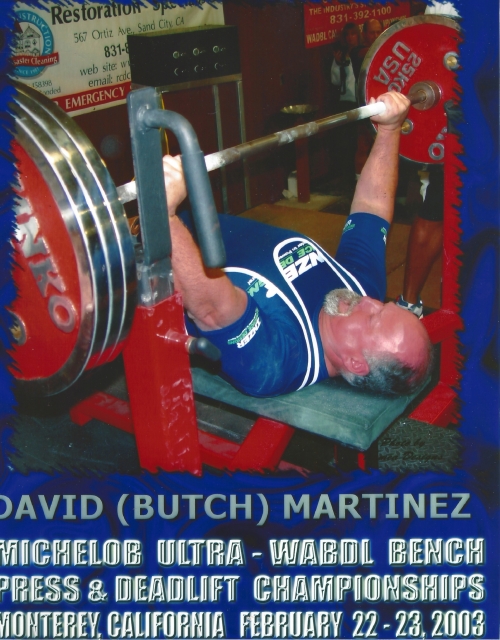 A new story from our Recreation Section of the Hall of Fame:

While most 68 year old retired men are looking for an easy chair to rest in, David Martinez, better known as Butch, is working hard lifting weights in his home gym here in Antioch. The 1970 Antioch High grad has always enjoyed lifting, but things changed roughly 20 years ago. He became serious about lifting, more specifically, about bench pressing. As a member of the Big C Gym in Concord, he entered his first bench press competition after being encouraged by a staffer and walked away with a nice 18 inch first place gold trophy cup. Encouraged by his newly found success, Butch entered the upcoming Amateur Athletic Union (AAU) power lifting contest and to his surprise, won the Gold again.

In the following two decades Butch continued to enter sanctioned competitions by the AAU, the International Power Lifting Association, and The World Association of Bench Pressers and Dead Lifters (WABDL). Sanctioned competitions are heavily regulated and have drug testing, age and weight classifications and smaller sub-groups. Such sub-groups as, the RAW classification- for those who don’t wear special wraps and uniforms to support the strain on joints when lifting. There’s also the Law-Fire classification, which is due to one of Butch’s job classifications at the Contra Costa Water District he qualifies. In these decades he would enter the 47 to 67 year old age groups, the 220 pound weight class, RAW, and Law-Fire Divisions. When recently visiting Butch he wasn’t training due to COVID-19, and didn’t enter the WABDL competition in Las Vegas. Noticing a paunch, but well developed arms, I wondered why he wasn’t more muscular, and in Butch’s typical sense of humor he said, “That’s the pretty boys in body building, in weight lifting we’re fat old bald guys!”

All kidding aside, Butch’s 20 years of accomplishments speaks for themselves! At the AAU level Butch garnered three World Records and four International Championships. In WABDL competitions, he lifted in over 40 meets and 20 State championships. During these competitions Butch won 16 State Championships, eleven World Championships, and set five WABDL World Records. It would be in 2005 at the WABDL California State Championships held in Monterey that Butch would achieve his greatest accomplishment, an All-Time Best, 435.2 pound bench press, establishing a World Record in his classifications. Today, his 297.5 pound bench press at the 64 year old, 220 pound weight class in the RAW, Law-Fire Division, stands a WABDL World Record. In recognition of Butch’s years of endurance and accomplishments, he was honored by being inducted into the WABDL Hall of Fame at the 2018 World Championships in Las Vegas. Congratulations Butch on your career and you’re well deserving WABDL Hall of Fame Induction!

Barbara and Steve Martinez are the proud siblings of David Butch Martinez.

Antioch 30, Acalanes 28: Sophomore sensation Najee Harris ran for 279 yards and four touchdowns, allowing the Panthers to withstand the remarkable efforts of Acalanes quarterback Casey Harrington on Friday, August 29. Harrington passed for 366 yards and two touchdowns and ran for two more scores. He gave the Dons a 14-0 first-half lead with…

Taiwan Jones, (Left) ’07 Deer Valley High, now in his ninth season in the NFL and playing for the Buffalo Bills, has been selected for the 53 man roster as a running back but will contribute on kick and punt special teams. Congratulations Taiwan! For more on the Eastern Washington Subdivision NCAA All-American Deer Valley…

Pico was drafted by the Chicago Cubs out of high school. Ironically, his Major League Baseball pitching debut on May 31, 1988 was a 4-hit shutout of the Reds, becoming the first time a rookie player pitched a shutout in a debut game since 1934. Pico played for 13 seasons professionally, and has spent the…