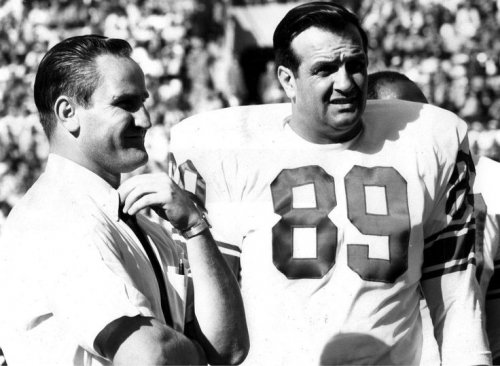 In his second year as an NFL head coach, Don Shula, 34, had a stable of future Hall of Famers to lead as the 12-1 Colts faced off in the 1964 NFL Championship game against the Cleveland Browns 11-3-1.

Defensively, Shula had one of greatest defensive ends to play the game, Antioch High’s, 11 time Pro- Bowler and Future Hall of Famer (1972) Gino Marchetti. Marchetti in his 13th and next to final season in the league was 37. Although Shula and Marchetti lost to the Browns, and their careers were going in different directions, they would develop a friendship that would last more than 50 years.

By Phil Jensen POSTED: 11/19/2014 01:23:43 PM PST In the third quarter of last Friday’s 50-26 win over San Leandro High, it occurred to Antioch coach John Lucido that star sophomore running back Najee Harris might have broken the school record for rushing yards in a game. “I said ‘I think he’s over 300,’” Lucido…

Alumni, Community and Class of 2016 Inductees will meet for 10th Hall of fame Gala Dinner at Lone Tree Golf Course

Taiwan Jones, (Left) ’07 Deer Valley High, now in his ninth season in the NFL and playing for the Buffalo Bills, has been selected for the 53 man roster as a running back but will contribute on kick and punt special teams. Congratulations Taiwan! For more on the Eastern Washington Subdivision NCAA All-American Deer Valley…