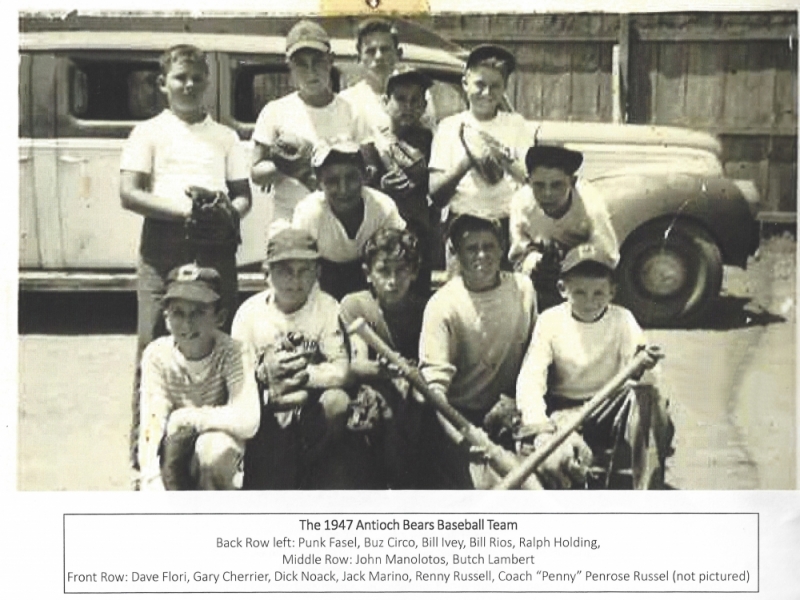 Just as in Kevin Costner’s movie, “Field of Dreams” the 1947 Antioch Bears played baseball in a cornfield. The Bears, a sandlot team made up of 9 to 13 year old boys played ball in a growing cornfield in Antioch’s old Prosserville District on Seventh Street.

Each day after work, Penrose “Penny” Russell would watched the boys play baseball. He became impressed by how hard they played day after day, this wasn’t a passing fad, they were passionate about playing baseball. But there was a problem, the baseball diamond they were playing on was being overgrown by corn stalks! So Penny went to City Hall for a solution. Maybe the guys could continue playing at the city ballpark at 10th and A?

The City approved of his idea and Penny became the Coach and Manager of the newly minted Bears. From his own money Penny bought balls, bats and gloves. As the team pre-dates Little League Baseball by nearly a decade (1956), there was no one else to play and the boys began to tire of playing among themselves.

So Penny put on his manger hat and looked for competition and found Pittsburg and Walnut Creek had a group of boys playing and they were interested. So Penny, the manager of Western California Cannery, would pack up the boys and baseball gear into the old cannery bus, as seen in the photo, and would drive the boys to their games.

From an old Antioch Ledger newspaper article dated Saturday, July 29, 1947, it said the “Antioch Bears traveled to Pittsburg and defeated an all-star nine there 24-10, for their 5 win in six starts.” They also beat the Walnut Creek Eagles 24-13 in late August. From the newspaper articles it’s difficult to say how many games the 1947 Bears played or how many they won or lost but what is sure, Antioch was proud of their team that came from a field of dreams.

One of the boys of the 1947 Antioch Bears was, 2007 Hall of Fame Inductee Ralph Holding. Ralph would go onto to be drafted by the Chicago Cubs-

Featured in the September 2014 edition of the Antioch Herald. By Allen Payton Debbie Nelson is proud to announce the opening of the new All American Sports Academy in Antioch. Debbie grew up in the local community and attended Antioch High School where her softball jersey number has been retired in her honor. She was…

Antioch High School football star Najee Harris has orally committed to the University of Alabama, his mother, Tianna Hicks, confirmed early Monday afternoon. Harris, a 6-foot-2, 209-pound running back, rushed for 2,263 yards, averaged 205.7 yards per game, and scored 23 touchdowns during his fantastic sophomore season in 2014. He broke the school record for…