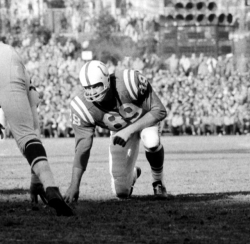 Gino Marchetti, the mountain of a man who personified Antioch toughness on and off the field has succumbed to death in Baltimore, Maryland, April 29, 2019, at the age of 93. Anyone growing up in Antioch during the 1940’s through the 1970’s either had a father or an uncle who played with Gino or knew someone who did.

Gino was undoubtedly one of the legends for whom the Antioch Sports Legends was built for, has his own corner in his honor. Gino Marchetti, Antioch’s NFL Hall of Famer, gone but never forgotten.

Gino’s Obituary by the Baltimore Sun:

Hall of Fame defensive end Gino Marchetti put fear into opposing quarterbacks as the leader of the Baltimore Colts defense. He played his rookie season for the Dallas Texans and the rest of his career for the Colts. He led the Colts to two NFL championship titles, was an 11-time Pro Bowl selection, and named to the NFL’s 75th anniversary all-time team. Known for his toughness in playing through injuries, he retired at the age of 40. Marchetti served in World War II, fighting in the Battle of the Bulge. He and Colts running back Alan Ameche started the fast food chain, Gino’s Hamburgers, which was sold in 1982, becoming part of the Roy Rogers chain.

The secret to his success on the field: “At the line of scrimmage, I never watched the ball. I’d watch the three guys opposite me. If the guard left a split second before the tackle did, I was off. You could tell the play from the way they leaned, or the way they put their knuckles down.” —Marchetti told the Baltimore Sun in 2006

What they said about him: “He revolutionized the way you play that position in the NFL. Prior to Gino, the attitude [of pass rushers] was to try to physically overpower the offensive tackle. Gino showed that with good instincts and a lightning quickness, he could get around his man without really engaging him. The offensive tackle’s uniform never got very dirty, but the quarterback’s sure did.” —Former Colts coach Don Shula

“You’ll never know the sleepless nights I had when Green Bay was getting ready to play Baltimore.” —Forrest Gregg, the Packers’ Hall of Fame offensive tackle, who passed away earlier this month

“For 11 years, I thought the Colts were going to trade me and I was afraid I’d have to play against Gino — so I watched him real close. I never saw anybody beat him, really.” – Colts Hall of Fame lineman Jim Parker (1934 – 2005)

Lawrence Worth Shaw Jan. 18, 1929 – Jan. 2, 2012 Resident of Antioch Worth was born in Elwood, Indiana and move to Antioch as an infant. He lived in Antioch for 83 years. Worth graduated from Antioch High School in 1946 and excelled as a three-sport athlete. After high school he served in the U….

It’s with great sadness to announce Antioch Sports Legends Co-Founder Jim Boccio passed away at his home yesterday. We send our love and sympathies to his wife Phyllis, and the Boccio Family at this difficult time. Mr. Boccio, recognized as the Community Leader in the 2018 Hall of Fame Class, will always be remembered for…